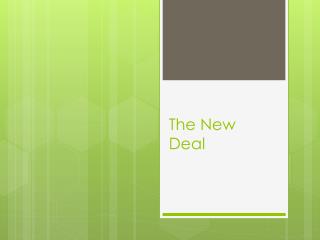 The New Deal. A New President. Franklin D. Roosevelt became president in 1933. He immediately began trying to get out of the Great Depression . He started many new programs. They were called the New Deal . . The New Deal. The New Deal came from one of Roosevelt’s speeches. INITIATING THE M&amp;A DEAL - . preparing for the deal, finding a buyer, conducting due diligence &amp; financing

15-5 - . new deal reforms endure. how is the new deal viewed today? what effect did new deal policies have on labor,

The New Deal - . mr. mizak modern american history. the problem. the country is in the heart of the worst economic

Deal or No Deal - . jillian wanted to save 7/8 of her earnings from the last two weeks. she earned $84.12 the first week

The 1 st New Deal vs. The 2 nd New Deal - . what is the “new deal”?. the new deal was groups and organizations that

FDR and the New Deal - . fdr. came from great wealth, no first hand experience with the great depression elected with a

Analyzing the New Deal 22-4 - . the main idea the new deal had mixed success in rescuing the economy, but it