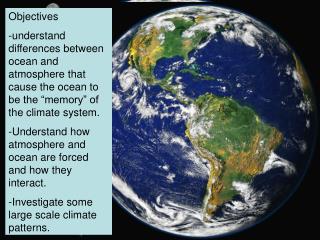 Objectives understand differences between ocean and atmosphere that cause the ocean to be the “memory” of the climate system. Understand how atmosphere and ocean are forced and how they interact. Investigate some large scale climate patterns. Outline:

Surface Temperature Protocol - Goals for the training session. provide an inquiry context for the data collection and

CLOUD TYPES AND SURFACE TEMPERATURE - . urban heat islands. urban heating. as time goes by: cities seem to be heating up

SURFACE TEMPERATURE IS INCREASING ! - . rate of increase in average surface temperature is 20-30 faster than last