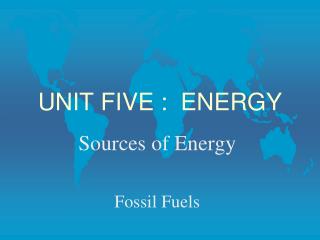 UNIT FIVE : ENERGY Sources of Energy Fossil Fuels How Does Energy Relate to Agriculture? Agricultural products surround us. Farms use a tremendous amount of energy in various forms to raise crops … electricity to heat chickens, fuel for tractors, natural gas for fertilizer, and so on.

Unit 4 Energy and Momentum - . this unit is a continuation of the study of mechanics that trainees studied in units 2