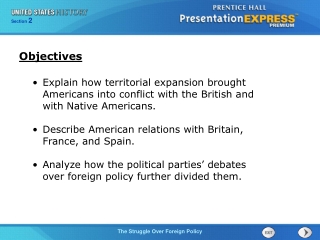 Objectives. Explain how territorial expansion brought Americans into conflict with the British and with Native Americans. Describe American relations with Britain, France, and Spain. Analyze how the political parties’ debates over foreign policy further divided them. Terms and People.