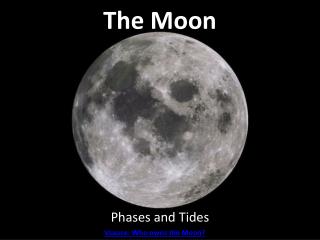 The Moon. Phases and Tides. Vsauce : Who owns the Moon?. Moonlight Five friends noticed they could see better at night when there was a full Moon. They wondered where the moonlight came from. This is what they said : Curtis: “The Moon reflects the light from the Earth .”