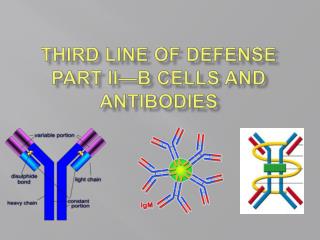 Third Line of Defense Part II—B cells and antibodies. B lymphocytes (B cells). B cells look exactly like T cells and NK cells. B cells mature in the bone marrow (not the thymus gland, like T cells). The Immune Response: Antigen-Antibody Reactions - . introduction. antibodies are bifunctional - they bind to the target

Chapter 2 - . antibody structure and the generation of b-cell diversity. the structural basis of antibody diversity.

The Human Immune System - . video. what is the immune system?. the body’s defense against disease causing organisms,