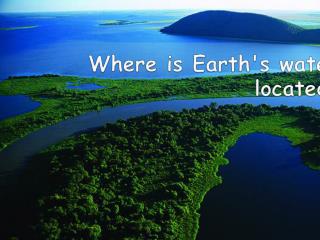 Where is Earth's water located ?. Earth’s Balancing act :. The Earth is a "closed system,“ That means that the Earth neither gains nor loses much matter, including water. Water is continually moving around, through, and above the Earth as water vapor, liquid water, and ice ䷀ Heaven over Heaven - . the creative. ䷁ earth over earth. the receptive. ䷂ water over thunder. difficulty at the

If the Sun is located at one focus of Earth’s elliptical orbit, what is the other focus? - . a. earth b. the moon c.

Earth in space - . topic 3 in review book. i. celestial observations. all of the objects in our sky appear to be located