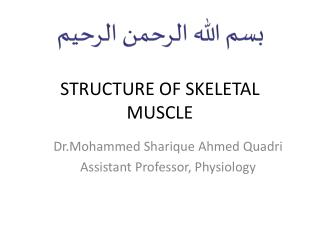 بسم الله الرحمن الرحيم. STRUCTURE OF SKELETAL MUSCLE . Dr.Mohammed Sharique Ahmed Quadri Assistant Professor, Physiology. Objectives. By the end of this lecture, you should be able to: Skeletal Muscle Structure - . basic structure. this stuff is easy!. each skeletal muscle is an organ composed mainly of