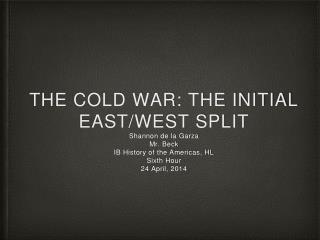 NBA playoff action - Highlights from the east and west conference

Palearctic region - Of the approximately 9200 species of birds, only about 290 are marine species although land only

Cold War - . essential questions. what conditions and issues led to mistrust between the u.s. and ussr, thereby leading

Compromise and Conflict in the early 19 th century (early 1800s) - . what compromise drew an east-west line through