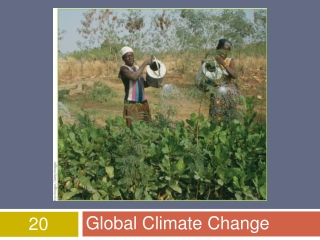 The Climate of the Earth: CO2 and “Climate Change” (=Global Warming) - . note: “climate change” was a term

Climate Change - . by c. kohn - waterford wi. global warming vs. climate change. climate is the long-term average of the

Chapter 21: Global Climate Change (Condensed) - . foreword. the issue of global climate change may be one of the most