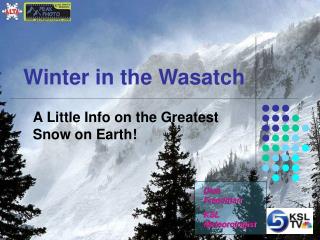 Winter in the Wasatch. A Little Info on the Greatest Snow on Earth!. Dina Freedman KSL Meteorologist. Introduction. Utah is known for the “Greatest Snow on Earth” Light and fluffy Tons of snow Awesome Scenery and Mtns. It’s not super cold All around great for winter sports. The Wasatch Fault - . why do faults happen?. faults are areas where the stress of a plate along its borders causes

Wasatch Mountains - . event planning. mission and vision:. mission: our purpose is to create the ideal event for our

Animals in the Winter - . what do animals do during the winter?. think talk to a partner share with the class. what do

Waterproofing In The Winter - As with many home improvement projects, waterproofing your basement may be something

The Lion in Winter - . the public good in private lives. question…. what does the lion in winter suggest about the

The winter in Iceland - . by: lucía félix, ikram amraoui and cristina jiménez. geography and

The Winter - By: tyler k. winter is as cold as a raging blizzard. winter reminds me of freezing, crystal like snow.