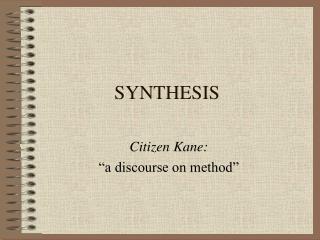 Synthesis - . what does it mean to “synthesize” information? . background…. while we are not writing a synthesis

SYNTHESIS - . “for the purposes of scoring, synthesis refers to combining the sources and the writer’s position to

Synthesis - . a + b → ab two or more elements or compounds combine to form a single new compound examples h 2 + o 2 →

Synthesis - . advanced techniques. other modules. synthesis would be fairly dull if we were limited to mixing together

Synthesis - . what is synthesis?. the oxford english dictionary says: “to put together or combine into a complex whole;