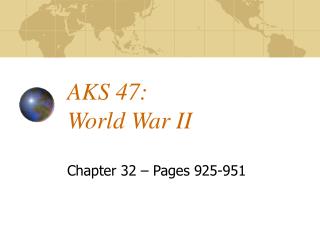 AKS 47: World War II. Chapter 32 – Pages 925-951. Early Challenges to World Peace Sept. 1931: Japan Invades Manchuria; Withdraws from League of Nations. World Reaction?: W. nations did not want to get involved b/c they had their own problems to deal with Result: Continue aggression.