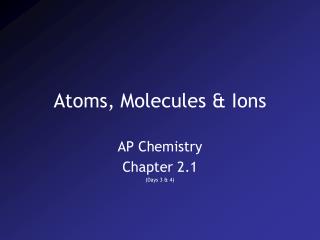 Atoms, Molecules & Ions. AP Chemistry Chapter 2.1 (Days 3 & 4). Subatomic Particles. Protons and electrons are the only particles that have a charge. Protons and neutrons have essentially the same mass. The mass of an electron is so small we ignore it. Symbols of Elements. Atoms, Molecules and Ions - . chapter 2. dalton’s atom. what are the main components of dalton’s theory?. elements