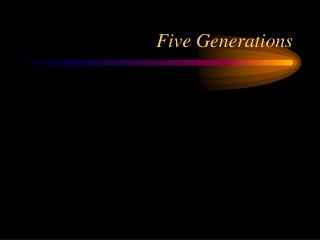 Digital Transactors vs Digital Integrators: A Quiz - While all the generations use social media, new technologies and

Five Generations in the Workplace - . a presentation by: vince pavic director of human resources and employee relations,

Mixing it up across generations - . kathy weinsaft wyoming association of rural water systems. so what are we talking

Different Generations - . it is not uncommon to find one generation that is very different from the preceding generation.

Evolution - . genetic change in population or species over generations. look at us now!!!. put some clothes on!. theories

What is Social Stratification? - . social stratification – a system by which a society ranks categories of people in a