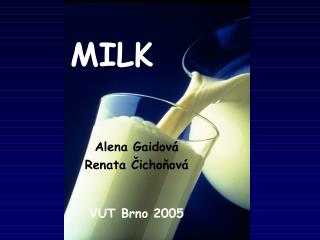 MILK. Alena Gaidová Renata Čichoňová VUT Brno 2005. What is milk?. white liquid arises in mammary organism as a nutrition for suckling excellent source of calcium, vitamin D, riboflavin and vitamin B12 it provides more than 25% of the Recommended Daily Intake milk is 87 % water