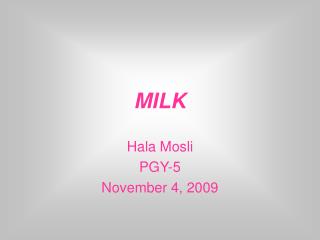 MILK. Hala Mosli PGY-5 November 4, 2009. Objectives:. What is prolactin? Where does it come from? How is it regulated? Disorders of prolactin production. Prolactin. 198-Amino acid polypeptide hormone. Contains three intra-molecular disulfide bonds. Gene located on chromosome 6.