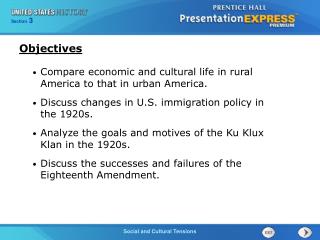 Objectives. Compare economic and cultural life in rural America to that in urban America. Discuss changes in U.S. immigration policy in the 1920s. Analyze the goals and motives of the Ku Klux Klan in the 1920s. Discuss the successes and failures of the Eighteenth Amendment. Terms and People.