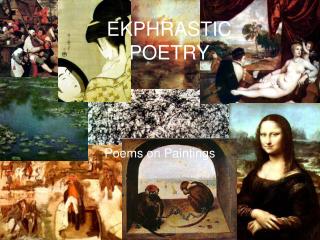 EKPHRASTIC POETRY. Poems on Paintings. Ekphrasis. Ekphrasis is the graphic and rhetorical description of a visual work of art. Ekphrastic poetry is poetry that focuses on works of art to “to interpret, inhabit, confront, and speak to their subjects.” (“Ekphrasis,” Poets.Org) Ekphrastic Poetry - . a study in art and language. ekphrasis. n. “ composed from the greek words ek (out) and phrazein

Ekphrastic Poetry - . a conversation between poetry and art. sources: corn, alfred. “notes on ekphrasis .” the