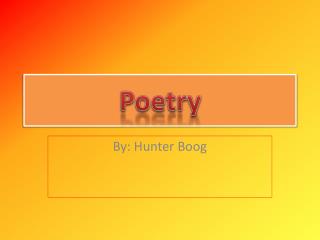 Poetry. By: Hunter Boog. MY POEM . The Animals By Josephine Jacobsen. THE ANIMALS . At night, alone, the animals came and shone. The darkness whirled but silent shone the animals The lion the man the calf the eagle saying Sanctus which was and is and is to come.