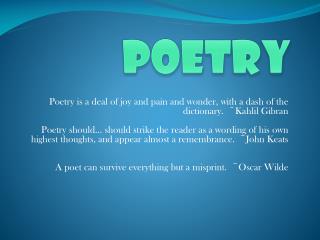 Poetry. Poetry is a deal of joy and pain and wonder, with a dash of the dictionary.  ~Kahlil Gibran Poetry should... should strike the reader as a wording of his own highest thoughts, and appear almost a remembrance.  ~John Keats A poet can survive everything but a misprint.  ~Oscar Wilde.