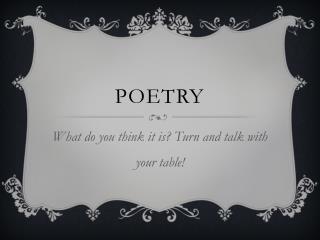 POETRY. What do you think it is? Turn and talk with your table!. Definition. po·et·ry noun ˈ pō-ə- trē writing that formulates a concentrated imaginative awareness of experience in language chosen and arranged to create a specific emotional response through meaning, sound, and rhythm.