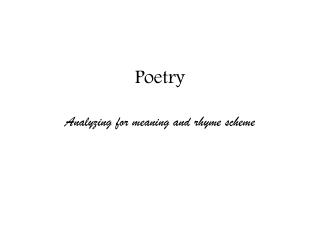 Poetry. Analyzing for meaning and rhyme scheme. Fire and Ice Robert Frost. Some say the world will end in fire, Some say in ice. From what I’ve tasted of desire I hold with those who favor fire. But if it had to perish twice, I think I know enough of hate To say that for destruction ice