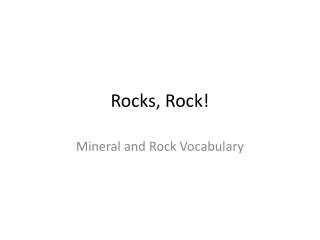 Rocks, Rock!. Mineral and Rock Vocabulary. Rock. Rock is a solid mixture of crystals of one or more minerals Rocks are categorized into 3 types on how they are made Each rock in each category is classified (named) by its TEXTURE and COMPOSITION. Igneous Rock.

Rocks - . definition of rock. a rock is a hard material made of one or more minerals a rock can be made of only one

What is a Rock? - . a rock is a: naturally formed, consolidated material, composed of grains of one or more minerals.

Rocks and the Rock Cycle - . the rock cycle. the continuous and reversible processes that illustrates how one rock

Rocks - . a solid material made up of 1 or more minerals, or other things – including the remains of once-living

Rocks A rock is a mixture of one or more minerals. They are classified by the way they are made. - Rocks a rock is a

Rock TYPEs and the Rock Cycle - . rock types. rocks are classified by how they form. there are 3 main rock types: igneous

Rocks - Chapter 4. rocks. classifying rocks. rocks are made up of two or minerals. about 20 minerals make up most of the

Rocks Rock! - . what are rocks? . rocks are always underneath you. even on water, there is rock beneath you. rocks are

Rocks and Rock Cycle - . rocks. a rock is a mixture of two of more minerals- a mixture is a physical intermingling of