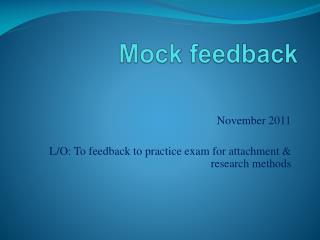 Mock feedback . November 2011 L/O: To feedback to practice exam for attachment & research methods. Look at your papers and mark. At the top of the paper please write and complete the following SMART target Mock Feedback - . read my feedback on your mocks. generally. a questions – excellent focus on question and structure.

Mock exam feedback Research Methods - . question 1(a). hypothesis must be operationalised must be written as a prediction

ENGLISH LANGUAGE MOCK SECTION A FEEDBACK - . question 1 what do you learn from the article about the beach to city

Read your mock feedback Fill in your assessment logs - Intervention – wednesday after school. fares and reginald. a

Mock Interviews - . procedures. procedures--general. check interview schedule to see: when/where you will be an

Mock Election - . students get to vote in the local, state and national elections. why is it important to vote?. these