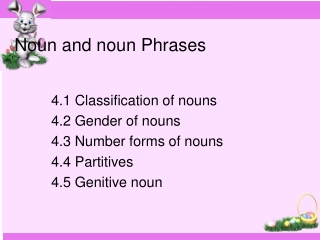 Noun and noun Phrases. 4.1 Classification of nouns 4.2 Gender of nouns 4.3 Number forms of nouns 4.4 Partitives 4.5 Genitive noun. WHAT ARE NOUNS?. Nouns are naming words. They name people, places and objects. They can also name ideas, emotions, qualities and activities. Phrases and Clauses Summary - . ms. lópez march 7th, 2012. phrases. is a prepositional phrase that modifies a noun or

Noun Madness - . created by colin shea. a noun is a word that names a: person place thing idea. proper noun a noun that

Appositive phrases - . provides more information about a noun. most often appears directly after the noun it identifies

Vocabulary Words - . noun when people have the same opinion. agreement. noun a person whose job is to keep peace between

Remorse (Noun) - . a deep regret for having done wrong; a feeling of guilt. silhouette (noun). the dark shape or shadow

Noun Clause - . noun clause. noun clause—a subordinate clause that is used as a noun can be a subject, complement ( pn

Vocabulary 13 - . bellwork. monday, march 4 copy the words and definitions. utility- (noun) a service provided to the

9 Grammar Phrases - . appositive phrases. phrase. a phrase is a group of words, without a subject and verb, that

Parts of Speech Review Everything that needs to be in the foldable! - . nouns. a noun is a person, place, thing, or idea

Mrs. Walters’ Class Chants - . we love to learn about parts of speech! . noun. “a noun, a noun is a person, place,

Noun clause - . let’s start. yeah ,it was about the noun clause which is a dependent clause that functions as a noun

Noun Phrases - . bridget green grammar mfwi; based on mark landa, barbara bent, winnie cragg. what is a noun?. a noun is.