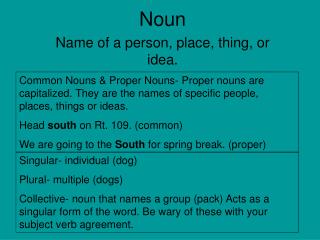 Noun. Common Nouns & Proper Nouns- Proper nouns are capitalized. They are the names of specific people, places, things or ideas. Head south on Rt. 109. (common) We are going to the South for spring break. (proper). Name of a person, place, thing, or idea. Singular- individual (dog) NOUN Uncountable Noun - Thing is classed as uncountable noun if it is not able to be counted by a or an ( sebuah ,

NOUN - . &amp; its kind by: poonam gautam. what is noun. noun is the name of a person ,place or a thing. for example:

Noun - . person, place, thing or idea! examples:. common noun:. names any one of a group of persons, places, things, or

Noun= - . person, place or thing. who or what a clause, phrase or sentence is about. do: find five nouns in the room and

Noun - . is word that names a person, place, thing or an idea. * jesus christ is the son of god. * teacher is the second