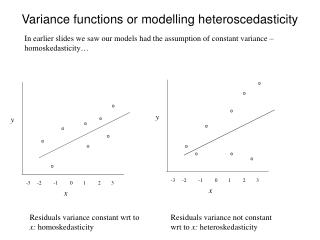 HETEROSCEDASTICITY - . the assumption of equal variance var(u i ) = σ 2 , for all i, is called homoscedasticity , which

Heteroscedasticity - . what does it mean? the variance of the error term is not constant what are its consequences ?

Analysis of Variance or ANOVA - . in anova, we are interested in comparing the means of different populations (usually

6. Mean, Variance, Moments and Characteristic Functions - . for a r.v x , its p.d.f represents complete information about

Hypothesis Testing for Standard Deviation or Variance - . testing a claim about a standard deviation or variance. we

ARCH (Auto-Regressive Conditional Heteroscedasticity) - . an approach to modelling time-varying variance of a time

Roles or Functions of Muscles - . agonists - muscles which produce movement by concentric contraction primary movers or

Is Modelling Science, Mathematics, or Instinct? - . william silvert. cientista visitante ipimar. who is a modeller?. it