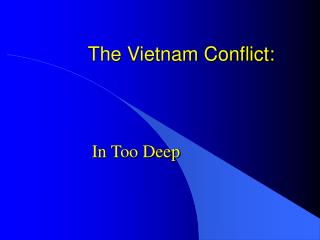 The Vietnam Conflict:. In Too Deep. Early History. #1. The Vietnam War - By: daniel nguyen. the vietnam war. summary. vietnam war also known as the second indochina war, the

THE VIETNAM YEARS - . chapter 22. moving toward conflict. section 1. vietnam is a long, thin country on a peninsula in

Vietnam War - . by: stephen korolyk. introduction. all parts of the vietnam war background about the war how it ended.

INTERPERSONAL CONFLICT - . the prisoner’s dilemma. a model of conflict. goldman ( 1966) presented a cycle of conflict

The 1970s - . the events that shaped the decade. domestic and world events. what in the world made us so cynical?. the