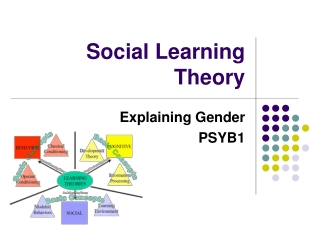 Social Learning Theory. Explaining Gender PSYB1. Look through the magazines choose just one person you like and explain why…. Think. List all the reasons why you chose that person. Discussion points. Who would you say is a role model for young boys? Social Learning Theory - . the individual vs. the environment. roots in traditional learning themes. you are what you

Social effects of the media - . media and violence. most researchers agree that there is an increase in viewer aggression

What is the Social learning theory of gender development? - . lesson 3 – sex and gender unit 2 – understanding other

The Social Learning Theory of Aggression - . aggression. discuss what can cause children to behave aggressively?. social

Social Cognitive and Constructivist Views of Learning - . what do university heights, iowa and dickeyville, wisconsin