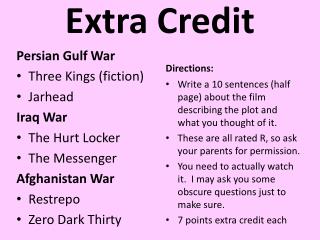 Extra Credit. Directions:. Write a 10 sentences (half page) about the film describing the plot and what you thought of it. These are all rated R, so ask your parents for permission. You need to actually watch it. I may ask you some obscure questions just to make sure.