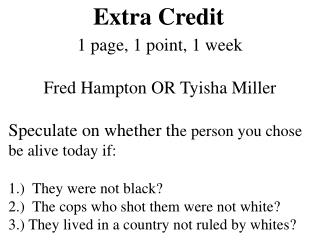 Extra Credit. 1 page, 1 point, 1 week Fred Hampton OR Tyisha Miller Speculate on whether th e person you chose be alive today if: 1.) They were not black? 2.) The cops who shot them were not white? 3.) They lived in a country not ruled by whites ?. Extra Credit