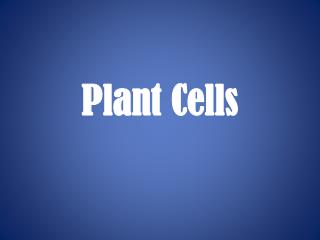 Plant Cells - . chloroplasts. found only in plant cells allow the plant to use sunlight to make food (photosynthesis).

Plant Cells - Hi guys, i’m celli the caterpillar and i am going to teach you about these tiny organisms that are found

Plant Cells - . cells are everywhere. plants have cells, too. let’s learn a bit about it. by: athene yu. parts of plant

Plant Cells - . do now:. the opposite of what happens in a mitochondria: photosynthesis. where does it all happen? the

Plant Cells - . flashback. are plants eukaryotic or prokaryotic? what does eukaryotic mean?. parts of a plant cell. c ell

PLANT CELLS - How does a plant’s lifestyle differ from an animals? what organelles are different?. plant cells.

Plant Cells vs. Animal Cells - . chloroplasts and mitochondria the power plants. what do plants have?. what do animals

Plant &amp; Animal Cells - . animal cell. cell membrane gate of the cell it controls what comes in and out of the