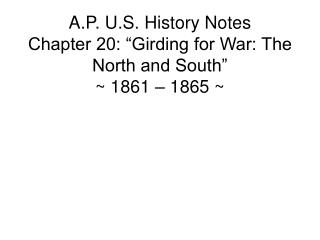 A.P. U.S. History Notes Chapter 20: “Girding for War: The North and South” ~ 1861 – 1865 ~. President of the Disunited States of America. On March 4, 1861, Abraham Lincoln was inaugurated president, he stated that there would be no conflict unless the South provoked it. Final Exam Review - . pre-civil war. what are some differences between the north and south. 1. which of the following was