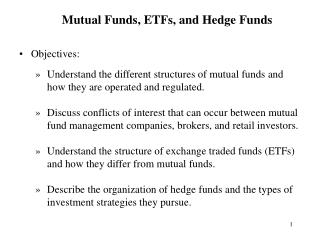 Mutual Funds, ETFs, and Hedge Funds. Objectives: Understand the different structures of mutual funds and how they are operated and regulated. Discuss conflicts of interest that can occur between mutual fund management companies, brokers, and retail investors.

PowerPoint Objectives - . you will be able to: create an effective powerpoint presentation to inform others about the

Objectives – PPT A - . discuss the unique contributions of physical therapists to the comprehensive care of young to

Objectives PPT-C - Cardiac - . discuss the effects and uses of medical (including pharmacological) treatments and tests