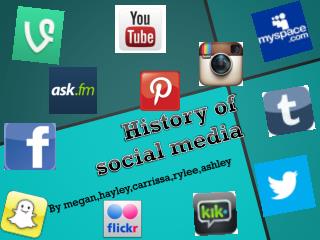 History of social media. By megan,hayley,carrissa,rylee,ashley. Twitter was created in March 2006 by Jack Dorsey, Evan Williams and Biz stone By July 2006 it was launched. It gained 500 million users in 2012 who posted 340 million tweets per day. Twitter. Brief history of Social Media Advertising - The advertising industry has changed drastically over the past century. from

The Full History of Social Media Innovations - Buzzy branding is the leading online marketing company in ontario. we

History of Media - . by jackson rogers- luxton. purpose of this

History of Communications Media - . class 3 email: wreader@cox.net. what we will cover today. finish our discussion

History of Instructional Media - . return to portfolio. click on the date range to view content from the particular era.

A History of Media - . past - pixels. a long long time ago. to be human is to create. this human impulse to create and

History of Communications Media - . class 4 email: wreader@cox.net. what we will cover today. telephone its

Uses of Social Media - . use 1: promote your own work. see how purdue makes it easy to share their news. new twitter use