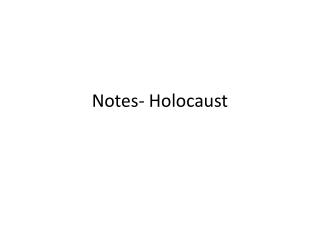 Notes- Holocaust. Define the term “Holocaust”. The Holocaust refers to a specific genocidal event in twentieth-century history European Jewry by Nazi Germany and its collaborator between 1933 and 1945. Jews were the primary victims— Holocaust Notes - . definition of jew (according to nazi party).   an individual with three or more jewish grandparents

Holocaust Notes - . core concepts. the power of words…. “the great masses of the people will more easily fall

Holocaust/Genocide Lecture Notes - . night. standard 3.12. 3.12 literary criticism: analyze the way in which a work of