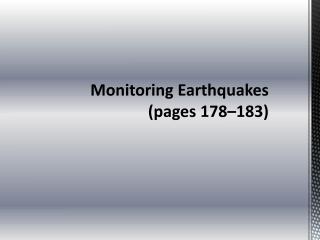 Monitoring Earthquakes (pages 178–183). The Seismograph (page 179). Key Concept: Seismic waves cause the seismograph’s drum to vibrate. But the suspended weight with the pen attached moves very little. Therefore, the pen stays in place and records the drum’s vibrations. JSP – Java Server Pages - . representation and management of data on the internet. introduction. what is jsp good for?.

Earthquake facts - Earthquakes are caused by a build-up of stress within the crust, causing rocks to fail suddenly. some