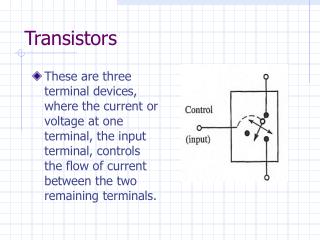 Transistors. These are three terminal devices, where the current or voltage at one terminal, the input terminal, controls the flow of current between the two remaining terminals. Transistors. Can be classified as: FET – Field Effect Transistor; Majority carrier device; Unipolar device; Transistors - What’s So Big About ‘Em? - . introduction. kwld what do you know about transistors? what do you want to

Microcontroller Programming How to make something almost do something else - . raffi krikorian mas.863 3 november 2003.

Chapter 1. Background on Microwave Transistors - . mar. 7th, 2006. 1.1 introduction. since the invention of the bipolar

What are Transistors? - . versatile three lead semiconductor devices whose applications include electronic switching and