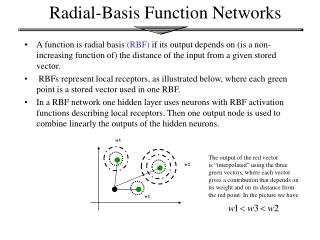 Radial-Basis Function Networks. A function is radial basis (RBF) if its output depends on (is a non-increasing function of) the distance of the input from a given stored vector. RBFs represent local receptors, as illustrated below, where each green point is a stored vector used in one RBF. Radial Basis Function Networks - . why network models beyond mln?. mln is already universal, but… mln can have many