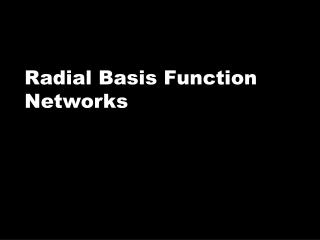 Radial Basis Function Networks. Why network models beyond MLN?. MLN is already universal, but… MLN can have many local minimums. It is often to slow to train MLN. Sometimes, it is extremely difficult to optimize the structure of MLN. There may exist other network architectures…. Radial-Basis Function Networks - . a function is radial basis (rbf) if its output depends on (is a non-increasing