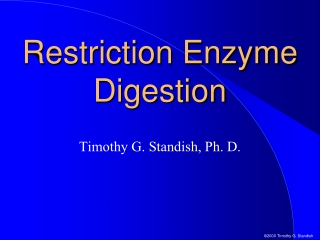 Restriction Enzyme Digestion. Timothy G. Standish, Ph. D. Enzymes are the Tools of DNA Technology. The tools of DNA technology are the same enzymes used by cells to modify their own DNA: DNA Polymerases DNA Ligase DIGESTION OF DNA WITH RESTRICTION ENZYMES - . what are restriction enzymes?. are enzymes that have the ability to

Restriction Analysis and Digestion of Lambda DNA - . dna is tightly p ackaged into c hromosomes which r eside in the