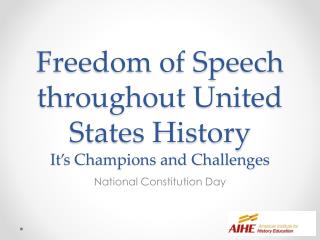 Freedom of Speech throughout United States History It’s Champions and Challenges. National Constitution Day. The Alien and Sedition Acts. Specifically the Sedition Act (passed in July, 1798 with an expiration date of March 3, 1801) United States Department of Justice Office of Information Policy - . an overview of the freedom of information act

U. S. Studies II United States and the Middle East Review Game - . identify the former leader of iraq that the united

The Westward Expansion of the United States - . why do you think people in the united states felt a need to expand

The United States of America - . 英语国家概况. 英语国家概况. chapter 13 literature. the united states of

EXERCISES 1-10 - . identify the cataloging principle being applied in each of these cases. 1. exercise 1: answers. 110

Aim : What changes occurred in the United States after WW2? - . objective. student will be able to discuss postwar