What is Matter? - PowerPoint PPT Presentation 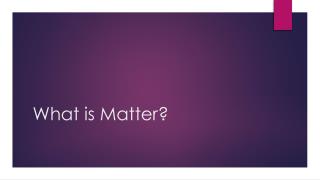 What is Matter?. Matter. Objects that you can see and touch, all around you. All living things, you The air Anything that has mass and takes up space You are matter, your hair, nails, legs and eyes. (all of you) The shoes you are wearing are matter On your desk list 3 pieces of matter….