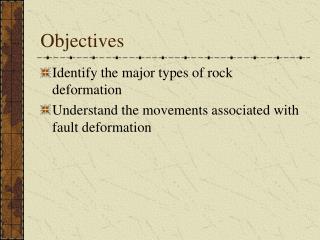 Objectives. Identify the major types of rock deformation Understand the movements associated with fault deformation. Rock Deformation. When rocks are subjected to forces greater than their own strength causes them to deform Types of Deformation Folding Faulting Joints. Elastic Deformation.

Course Objectives - . after competing this course, you should understand: privacy and security of sensitive information

Chapter 2 Objectives - . understand the fundamentals of numerical data representation and manipulation in digital

Objectives - . describe the underlying causes of wwi explain the chain of events that trigger wwi outline the chain of

OBJECTIVES - . after studying chapter 19, the reader should be able to: prepare for ase electrical/electronic systems

Learning Objectives - . accurately recognize overactive bladder (oab), with urgency as the core symptom, in the context

Writing Behavioral Objectives - . bte363/364. what is the purpose of learning objectives?. by knowing where you intend to