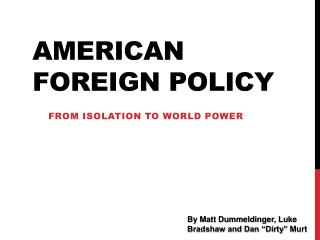 American Foreign Policy . From Isolation to World Power. By Matt Dummeldinger, Luke Bradshaw and Dan “Dirty” Murt. Washington at the head. War breaks out between Britain and France Washington declares the Neutrality Proclamation of 1793 despite greatly offending Jeffersonians American Foreign Policy - . key questions to be answered by end of lesson…. what is foreign policy ? what should be the

American Foreign Affairs/Policy - . what is it?. foreign affairs are the nations interacting and relationships with