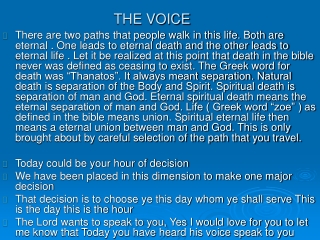 The Voice - . mr. fazzini public speaking. let’s start with the basics. air pressure is the “fuel” of the voice the

The Voice - . … that you’re looking for. trishlee

‘The Voice’ - . group 4. agenda. assessment of the ‘voice thrust’ analysis of the dimensions of ‘the voice

The Voice - . thomas hardy. the

The Voice - Who are you?. the voice. that one thing i can't escape. i believed what i heard over and over growing up.

The Voice - . b y thomas hardy. background. thomas hardy attributed this poem to the passing of his first wife, emma

The Voice - . b eyond imagery. does this sound like you?. “ i usually do not appreciate the rhymes and metres of

THE VOICE! - . your best communication tool. how the voice works. all professional speakers must “reawaken” their

The passive voice - . active voice. the subject is performing the action of the verb. tammy is calling alex. subject.

The Passive Voice - . “rock around the clock”. present passive= is_____ed. when the class room bell rings in your

The Passive Voice - . preliminary considerations uses tense formation tense forms the use of - by direct and indirect

THE PASSIVE VOICE - . table of contents. 1 what is the passive voice? 2. the passive endings 3. first conjugation 4.