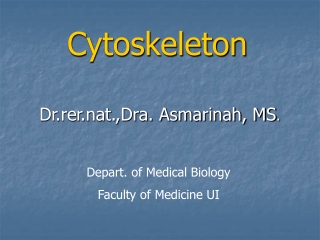 Cytoskeleton. Dr.rer.nat.,Dra. Asmarinah, MS. Depart. of Medical Biology Faculty of Medicine UI. Cytoskeleton. System of filaments in the cell, so that the cell have to be able to - change their shape move from place to place Chapter 7 - . microtubules by lynne cassimeris. 7.1 introduction. the cytoskeleton is made up of protein polymers. each

A Tour of the Cell, Part 2 Lecture 2, Part 2 - . cytoskeleton. network of fibers extending throughout the cytoplasm three

PIPs, Pattern Formation, and the Regulation of the Cytoskeleton - . william foster, phd, md department of physics

ECM, Cytoskeleton &amp; Junctions - . formative assessment. identify if these components are part of the ecm or

Cytoskeleton - . yasir waheed. cells have to organize themselves in space and interact mechanically with their