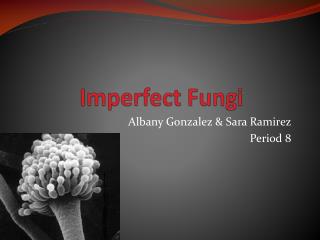 Imperfect Fungi. Albany Gonzalez & Sara Ramirez Period 8. B asic info. Imperfect fungi is called Deuteromycota. It is referred to as imperfect, not because the organism it self is flawed, but because scientist’s understanding of its life cycle are. Imperfect - . the imperfect, like the preterit, is a past tense. in english, we have one past tense. spanish has two.

Imperfect - . let’s put the past behind us. imperfect. use imperfect to describe the background of the story use

Fungi - . all multicellular fungi have hyphae = tubular growth in a substrate (soil, you etc.). diagram of fungal cell,

Fungi - . cls 212: medical microbiology. mycology: the study of fungi. characteristics of fungi : all fungi are