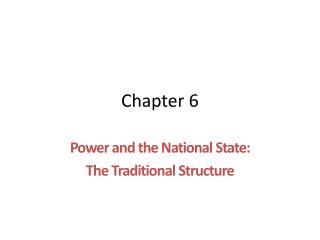 Chapter 6. Power and the National State: The Traditional Structure. State. Units of government that exercise legal authority over a specific territory and the people in it and that recognize no legitimate higher authority. State. States share all or most of the following 6 characteristics: